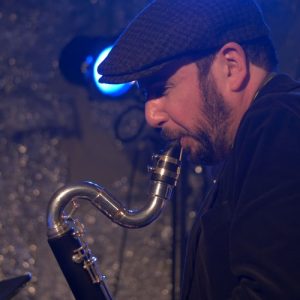 Joshua Nathan Rubin is a founding clarinetist, current board member, and served as the co-Artistic Director of the International Contemporary Ensemble (ICEensemble) from 2014-2018, where he oversaw the creative direction of more than one hundred concerts per season in the United States and abroad. He previously served as Program Director from 2011-2014. He developed LUIGI, ICEensemble’s management software that is available to ensembles and other arts organizations that are interested in transparency and collective management. As a clarinetist, the New York Times has praised him as, “incapable of playing an inexpressive note.”

Joshua has worked closely with many of the prominent composers of our time, including George Crumb, David Lang, Chaya Czernowin, George Lewis, Kaija Saariaho, Pauline Oliveros, Okkyung Lee, Nathan Davis, Tyshawn Sorey, John Zorn, and Mario Davidovsky. His interest in electronic music throughout his career has led him work on making these technologies easier to use for both composers and performers. Joshua can be heard on recordings from the Nonesuch, Kairos, New Focus, Mode, Cedille, Naxos, Bridge, New Amsterdam, and Tzadik labels. His album There Never is No Light, available on the Tundra label, highlights music that uses technology to capture the human engagement of the performer and the listener.

Highlights of his performance career include the premiere of Dai Fujikura’s Mina with the Seattle Symphony (under Ludovic Morlot) and with the Nagoya Philharmonic Orchestra (under Martyn Brabbins); Iannis Xenakis’ bass clarinet concerto Echange, conducted by Steven Schick (recorded on Mode Records 261); performances of Pierre Boulez’ Dialogue de l’ombre double for clarinet and electronics in New York, Chicago, California, and Quiberon, France; and the premiere of Steve Reich’s Pulse at the composer’s 80th birthday celebration at Carnegie Hall under David Robertson (recorded on Nonesuch).

In recent seasons he has been featured as a soloist at the Mostly Mozart Festival at Lincoln Center, at Da Camera Houston and in chamber music engagements at Carnegie Hall, at Harvard University in Boston, Chicago, Los Angeles, Marseilles (France), and Huddersfield (UK).

He received degrees in Biology and Clarinet from Oberlin College and Conservatory, and his Master’s degree from the Mannes College of Music. His clarinet studies were mentored by Lawrence McDonald, Mark Nuccio and Steven Cohen. He served on the faculty of the Banff Music Centre’s Ensemble Evolution summer program from 2016-2019, and as faculty for Ensemble Evolution at The New School’s College of Performing Arts (CoPA) in 2020 and 2021.