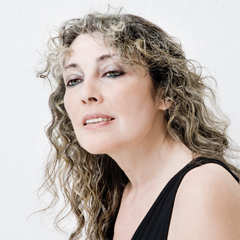 Marcela Pavia was born in Argentina of Italian descent, and also maintains Italian citizenship. She studied composition at the National University of Rosario in Argentina with Dante Grela, Francisco Kröpfl, and Franco Donatoni. She also studied in Milan, Biella and Academy Chigi of Siena, studying with Georgy Ligeti, Ennio Morricone and Henri Pousseur. She was artist-in-residence at the Virginia Center for the Creative Arts in the United States.